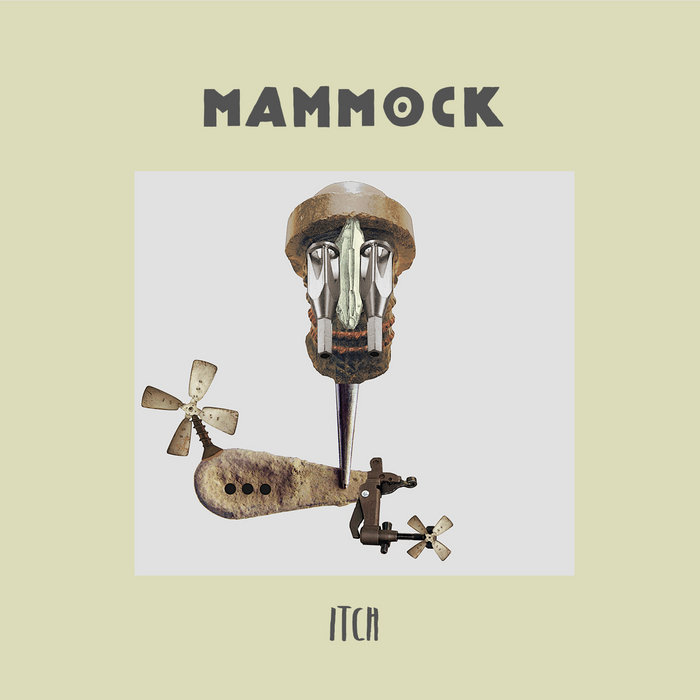 Alexandros Topintzis A great example of free music. Songs that are exploiting boundaries from heavy rock to hardcore without losing the real sense of genre-mixing experiments: to deliver good results: songs that touch the soul. Bravo!!! Favorite track: This Letter.

jacob1942 Upon hearing the first song I knew I had to buy this. Absolutely mental noise rock. Favorite track: Caterpillar.

UPDATE: AS OF 19/01/20, WE RAN OUT OF DOWNLOAD CREDITS! THANK YOU ALL FOR DOWNLOADING OUR ALBUM!!! "ITCH" WILL CONTINUE TO BE GIVEN FREE ON A "NAME YOUR PRICE" BASIS, AS SOON AS WE ARE BUMPED WITH NEW CREDITS ON JANUARY 31ST, 2020! IN THE MEANTIME, WE STILL HAVE SOME DOWNLOAD CODES IN OUR POSSESSION, SO IF YOU WANT YOU CAN MAIL US AND WE 'LL GIVE YOU ONE! THANKS!!!

Cast in order of appearance:

All music & lyrics by Mammock

"The world is a wonderfully weird place..." Tom Robbins, Still life with woodpecker

The above phrase might very well be the epicentre of the Mammock universe. We are living in weird times, in a weird place, and our ways keep getting even weirder. Mammock get inspired by the world around them to weave a web of several songs for their debut LP entitled "Itch", reflecting on their thoughts and feelings over the past few years.

The approach followed was holistic, aiming to craft a raw organic sound of their own and deliver a total that is greater than just the sum of its parts. The recording sessions turned out to be smooth and entertaining, leaving everyone absolutely satisfied with the end result. "Itch" has been a wild ride, therefore Mammock hope that everyone enjoys this album as much as they have!

Mammock is a musical quartet from Athens Greece, following the same rock tradition its members grew up with, but in their own weird fashion.

Track Name: Caterpillar
So you think you can change your ideas?
That you ‘re only afraid?
That the demons that crawl from your bedside
are your only mistake?

Look around you, you ‘re not getting wiser
We can all understand
Your excuses are not welcome anymore
No, I will not lend a hand

Joyhood, not my neighbourhood, not that I understood
How fast these dogs stole my food, my childhood.
Bring it on here, let me fix this, bring it here, jack - jack it up
No hands, no patch, these wounds itch too much.

So you think you can blame it on others?
That you ‘re coming out clean?
That your beauty is all that we see,
when you're ugly beneath?

You claim everyone’s out here to get you,
to steal your light away.
You've been crawling your way through your life
and a worm you'll remain!

You cut off our tails and poison the streets
Cages now broken, we’re gnashing our teeth

You chop off our ears, throw us in the thrash
We’re cutting the leash, wait for you in the dark

"Please...take this needle away from me...just...
just take this away from me…I didn’t ask for this...
it hurts so much...I'm so scared…please!"

Four feet, one love; tropping behind
You suffocate us ‘cause it makes you high

Smarter and stronger
Opposable thumbs?
Fuck you and your whole race
We‘re coming down hard!

Green cap, blue cap; house with no love
Open your drawer, pick up your gun.

Gun!
Track Name: Shark Attack
It’s hard to listen when the words,
true words they signal change.
Our mind’s a fucking trickster,
It binds us with its chains.

Pay no attention to the dramatic turn of events
‘Cause, as your see, one man’s struggle
is another one’s exploitation.
Power is already in.
In the end...there is no catharsis.
Can you hear it?

Try to remember our life
when it was not a hoax.
Deaf and illusioned we stand
to burn our way our hopes.

It comes late at night to inspect you
and drive you away from the truth,
to force down the pills and infect you,
with the strong dependance of youth.

It is what it is, tell me nothing.
Pray not to the gods that instill
the fear and the deep desperation
that all true believers must feel.

Release us from believing, and lead us into temptation.
Release us, release us, relieve us.
Track Name: Dirty Shoes
We’ve got no home, we’ve got no faction
We don’t even know who we are
We’re just divergents from that awful norm
Gotta live, gotta build, gotta make it up!

We die upon your shores of freedom,
still you don’t think we’re pure enough.
For all our dead and unborn children
you play your games and give us up.

We were there, taking chances for all
To the off beaten path, on the less travelled road

Thousands were gathered, so that our voices would rise
Breaking the silence from the years of demise

In the streets where the weak become strong
We used the pain, they used all of their force

But, morning comes...every hope, every dream
falls apart, breaking off at the seams
Break at the seams

Trusting you, were we fools not to see?
Hot summers, breaking our backs to believe…
There were strange times, holding hand to hand
Unknown faces, tears of joy to regret…

They told us to believe, in everything you say
and anytime you bleed
Go now wear your crown, see how it fits
Live for the vultures, die for the gift…

The slaves will no longer have need of their chains...

Rich people have fight clubs.
Track Name: This Letter
“This world’s a ship and we sail a sea of red”

Blank pieces of paper, a script for the silent
These clouds always moving, like the thoughts in my head.
We all pray for moments of peace,
and we yearn for haze and wonder
Do we cherish the lives that we live?
Do we treasure the beauty among us?

“There’s a storm that’s approaching
but I won’t run away from the bane,
I’ll stand my ground, side by side with the crew
‘Cause our date with the shore has been long overdue…

Of return there’s the anguish upon us, and our
shame is the reason that we weep
‘Cause we can no longer see, what you see…
Rum drowns away our sobriety”

“Hypocrite, I was there on the days of decay
and I was your lies, your deceit
Your sick, violent, numb ways
And it was you, who shut your eyes
on the monstrous deed…

This is no time to feel the guilt man
You only gave yourself to it
This is the time for drastic changes
You’d better look up to the peak.

Life is not black and white…

Bandcamp Daily  your guide to the world of Bandcamp